Murdering your wife and children should not earn you sympathy

Fairfax Media reported last Saturday on the horrific murder of Maria Lutz and her two children, Martin and Elisa.

Police and witnesses told Fairfax Media that Fernando Manrique appears to have planned the elaborate construction of pipes to deliver poisonous gas into the home where his wife and children were sleeping. He also burned his computer, making detailed evidence more difficult to find. Fairfax refers to police sources saying “they had a very good picture of what happened, and that there was little doubt this was the act of one person.”

The article also reports several witnesses stating Maria had asked for a divorce, and claims she had consulted a family law solicitor and written a contract of separation.

Despite all this evidence, which overwhelmingly points to a man planning and constructing an elaborate murder of his wife and children after she told him she was leaving him, the headline of the article read: “'A horrific thing': the death of the Manrique-Lutz family”.

While the circumstances described in the article indeed make this “A horrific thing”, it is not a simple “death of a family”. There was a perpetrator. It was not a tragic accident or unforeseeable disaster. The evidence presented is of a meticulously planned murder.

Quite simply, the information presented in this article is not what is described in its headline.

He was such a good guy

Also included in the article is in interview with a friend of Manrique. “Campos remembers Manrique as a private but warm man who cared deeply for his children.”

Cared deeply for his children? He spent weeks planning their murder! This is not how men who care for their children behave.

Uncovered has published before on the damaging practice of “but he’s such a good guy” commentary. And, as Australian Press Council Chair David Weisbrot said then,

“It’s pretty irrelevant to the story, and you would never include information like that in a story about an alleged armed robber, or an alleged terrorist. Yet there is that tradition in a lot of family violence coverage.”

It’s a shame that this otherwise through and commendable report, which provided such insight and context to a terrible crime, included such commentary.

As mentioned in the Fairfax article, speculation in the days following the murders was hurtful and repugnant in its suggestion that Maria was complicit in the murders, or even – as implied by the Kidspot headline below – solely responsible. 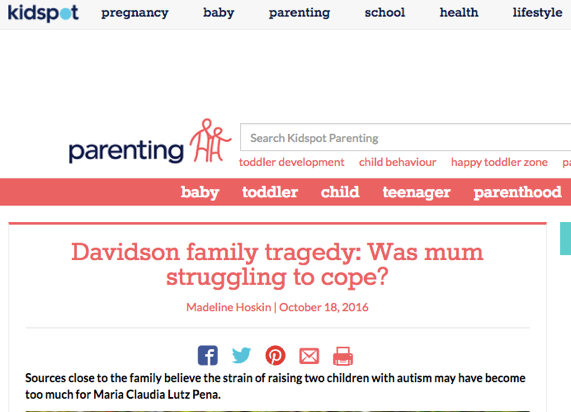 Kidspot quoted neighbours saying “Maria had been feeling the burden of raising two children with autism”. While it’s certainly true that services for autistic children could be improved, describing murdered autistic children as a “burden” rather than assuming they were, as was the case with these children, beloved sons and daughters is particularly regrettable. As evidence gathered over time proved, Maria was in fact a devoted mother, entirely prepared to care for her two children by herself.

Statistically, murder/suicide killing of partners and children is most likely to occur when women decide to leave their male partners, as shown by Coroners Court reports from QLD, WA, VIC and NSW. So why did Fairfax Media run the Lifeline number at the bottom of the article, without also including family violence helplines such as 1800 RESPECT?

Possibly the “such a nice guy” / “poor troubled man” framing blinded it to the reality that this was a case of domestic homicide and people in a similar situation to that of the victims, need information about where to get advice and support. Too often, the media use only the Lifeline number in cases of murder-suicide, implicitly privileging the distress of the perpetrator over that of the victims. Journalists should consider the position of readers who fear they may be at risk from their partners, and point them in the direction of help.

Much of the coverage of these murders is unfortunately typical of the common traits in the media’s reporting of men’s violence against women. From blaming the murdered mother, to assuming disabilities are an excuse for murder, to sympathising with a man who, it appears, deliberately murdered his wife and children.

Of course, reporting on such cases can be difficult. Balancing the public’s interest and desire for information against the need to wait on the conclusion of a police investigation is not easy. But the responsible reporting of men’s violence against women and children requires patience. And a better understanding of the context in which it occurs and the dangers of blaming victims.