“More needs to be done to protect vulnerable women and children,” according to the Herald Sun.

The paper kicked off 2017 by reviving its long-running ‘Take A Stand’ campaign – a first amongst Australia’s metro dailies in advocating for victims of family violence.

“We must do more to support victims of violence as they rebuild their lives after suffering the physical and emotional trauma of being in an abusive relationship,” said a recent editorial. 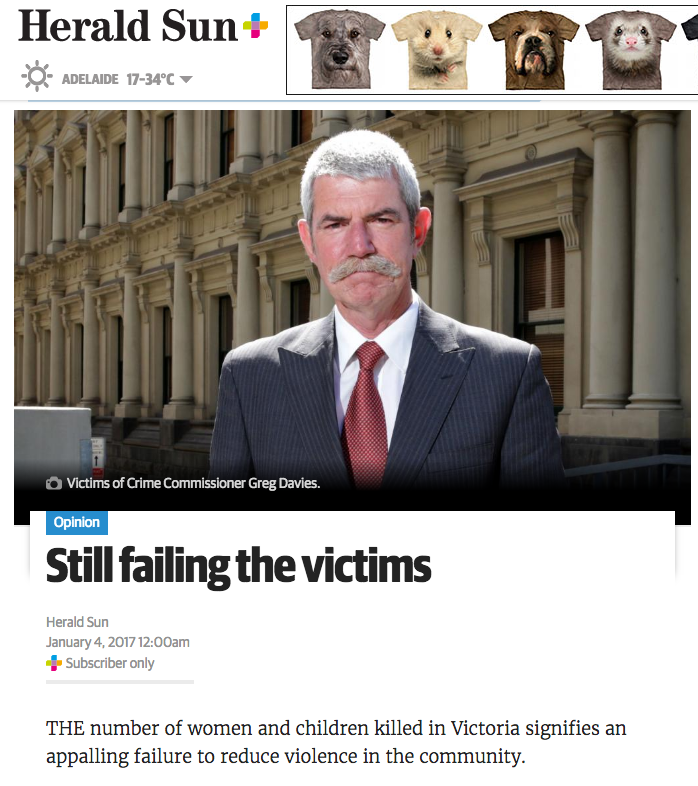 Except, it seems, if those victims happen to be homeless.

Over the past year, the Herald Sun has run another campaign of sorts, continually targeting homeless people sleeping on the streets or in squats in central Melbourne. Homeless people have been vilified by the paper for begging; using alcohol or drugs “in plain sight”; and simply for being.

By reporting on homelessness in such a manner, the paper is undermining its position on family violence. 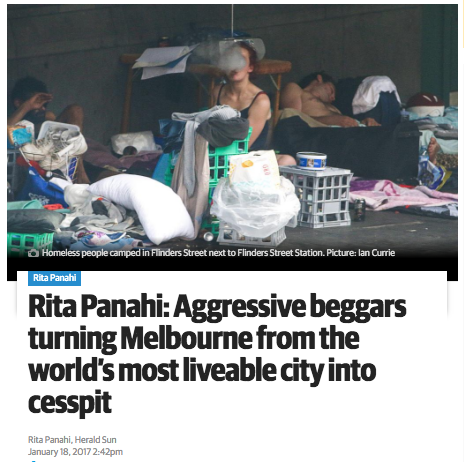 A massive 42 per cent of the 105,000 Victorians who sought homelessness assistance last year did so because of domestic and family violence, according to Kate Colvin, the head of  the Council for Homeless Persons.

“Most of the rough sleepers that are being vilified in the media have some experience of family violence,” she said.

“It’s ironic to be simultaneously advocating for the rights of people experiencing family violence whilst condemning those without a home, given that these groups are so often one and the same.”

For example, take Erin*. She spent much of last year living on the streets, in squats and in transient housing after fleeing her home with three children to escape an extremely violent partner.

Although Erin initially gave the Herald Sun permission to use an image of her in a story about homelessness, she felt the way it was used put her safety at risk.

Erin was worried her former partner may have been able to locate her whereabouts because of the coverage.

“I’m not at all happy about that,” she said.

According to Erin, the Herald Sun’s coverage of homelessness doesn’t give readers a sense of what life is like for women escaping violence.

“I did not want to leave our home but I had no choice.”

Erin’s former partner broke a domestic violence intervention order four times, forcing her and her children onto the streets to escape him.

For many months she was only able to access accommodation one night at a time, if at all.

“Every day you’ve got to drag your kids out of that motel, from whatever suburb they put you in, back and forth. And how are you meant to get the kids to school and kindergarten? There’s no stability at all. And there’s no hope.”

She said the media coverage of the issue completely missed the realities faced by women fleeing domestic violence.

“It’s so hard. I had to go to the doctor, for the extreme stress. And my feet are going, and they ache more when I’m stressed. And they wanted me to walk from here to there, pushing a pram and dragging suitcases. Dragging the kids around. They couldn’t even give me one week in one room. Every day you’re meant to go in to the housing offices. So that’s great if you’re in hiding,” she said.

“They’re not showing the things that are real. They need to show the big picture.”

According to the Australian Institute of Health and Welfare, "Domestic and family violence makes women and children vulnerable to homelessness in two main ways: firstly, violence removes the sense of safety and belonging associated with the home. Secondly, leaving a violent situation usually means leaving the family home."

“The tone of this coverage separates them as somehow different from ‘us’ and suggests that they’ve chosen their lot in life, and don’t deserve our sympathy or help,” she said.

The Council for Homeless Persons says media outlets stigmatising homeless populations should instead focus on what causes the problem in the first place – family violence and a chronic shortage of affordable housing.

If the Herald Sun’s editors and journalists truly care about victims of family violence, like they say they do, they should seriously consider taking up the Council’s suggestion. It’s time the paper focused on the link between homelessness and family violence.

*Name has been changed.